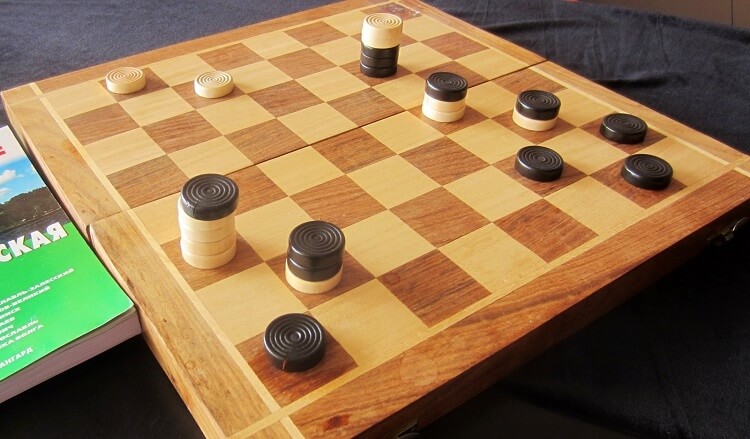 Bashni (also known as Column Checkers) is a variant of checkers known and played in Russia since the 19th century. This game is played according to the usual checkers rules, but with the difference that a captured piece is not removed from the gameboard, but is taken under a the jumping piece (or tower).

The towers formed during the captures moves along the board and obey always the upper piece. When jumping over the tower, only the top piece is removed from it and replaced by a piece with the color of the opponent to be marked.

The rules of the game in this page correspond to the most common variant of Bashni. The game is played on the dark squares of a of 8×8 checkers board. At the beginning of the game, 12 drafts for each player are placed like all other variants of Draughts.

The game of Bashni ends when one of the player block his opponent and prevent him to make any legal move, or capture all his pieces. Practice shows that a draw is a very rare event even in a game between strong equal opponents. A draw is declared either by mutual agreement of the rivals, or after 3 or more times the same position is repeated, or if the material balance of forces has not changed over the last 15 moves.