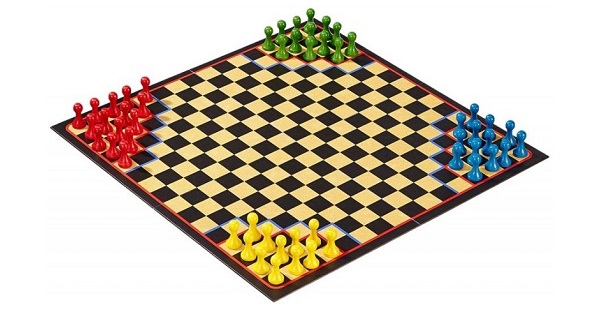 Halma is a board game for up to six people. It was invented in 1883 by the American surgeon George Howard Monks; the name Halma comes from the ancient Greek ἅλμα “jump”; Sternhalma is a German development of the Halma, which appeared in 1892.

Halma is considered as the precursor game of Chinese Checkers. Its name comes from the Greek word Halma, which means jump.

It is played on a 16 x 16 square board. Each player has 19 pieces, which are placed in opposite corners of the board.

Each player, alternately, has to move one of his pieces one square, in any direction, like a chess king. Or you can move one of your pieces by jumping over another of any color, to the next square in a straight line, which must be empty; These jumps can be chained, that is, the piece can keep moving by jumping over other pieces in the same way. You can only jump over one piece at a time. It is not possible to jump over two or more pieces together. Skipped pieces are not captured, but remain on the board.

The objective of the game is to place your own pieces in the opponent’s exit boxes. The game ends when one of the players has all their exit spaces occupied by pieces, of which at least one is from the opponent, who will win the game (this rule exists to prevent a player from leaving some of his pieces in the boxes exit, preventing the adversary from winning).

As you can see, Halma is actually almost identical to the Chinese Checkers, on a square board and with orthogonal and diagonal movements.