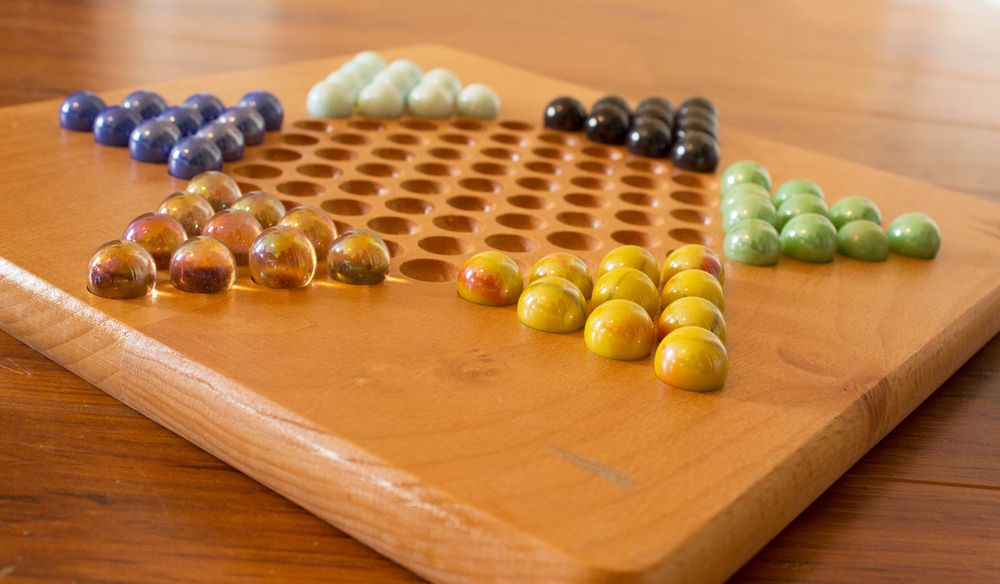 This game, despite its name, neither seems to be of Chinese origin nor is it played on a checkerboard! Regarding its origins, it is not clear if it came from China to Europe or if it was Europe that exported it to the East.

The Chinese checkers board consist of a six-pointed star joined through a grid. Where the lines intersect, at the points, the pieces are placed.

Basically, it is a simplified variant of the game called Halma. In the Halma, the pieces can move in eight directions; in the Chinese checkers, only in six. This results in a way of playing that requires less skill, but more attractive design.

Players place the pieces on the corresponding fields. If it is 2 or 4 players, the pieces will be placed at the confronted points of the star. When it comes to three players, one full and one empty field alternates, and each one plays only with ten pieces.

It is decided who will be the first to move. Each player moves a single piece during their turn.

A piece can move in any direction (forward, backward, diagonally) to go to the adjacent empty point. If it is occupied (by a piece of its own or the opposite) and emptied the point beyond, the piece can jump over the other. A single piece can make several jumps in a single turn.

One of the best strategies is to establish a kind of “ladder” from the board’s own field towards the other end, so that the pieces can fly by jumping several times and moving as much as possible in a single turn.

In this line it is essential to be attentive to the stairs of the opponent to try to block them. In addition, a very important aspect must be taken into account: the ladder itself can also be used by the opponent to reach his goal.

To win the game you have to move the fifteen pieces to the fields of the directly opposite angle of the star-board. The other players can continue playing until they achieve the goal.

There is a variant of Chinese checkers in which a piece can jump more than one filed at a time, but with two condition: