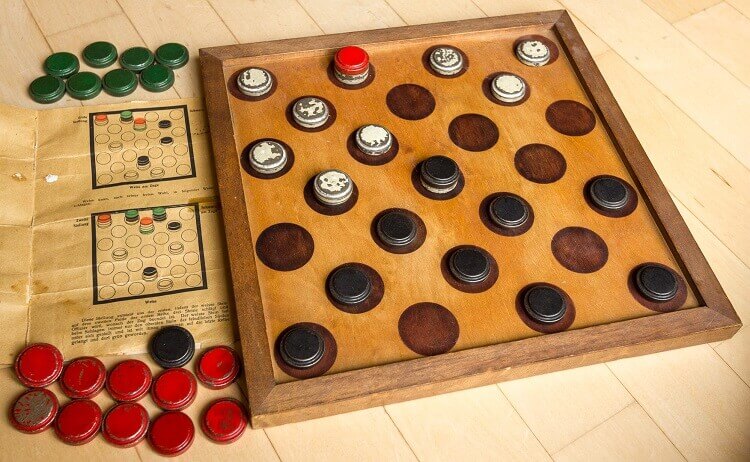 Lasca is a board game (similar to Bashni) for two players that was invented by the champion of chess Emanuel Lasker. Although the rules are simple, the strategy you can develop to win the game can become very complex. It is similar to the game of checkers but with an important difference, the captured enemy piece is not taken out of the game but remains on the board.

The players place their pieces on opposite sides of the board in the three closest rows.

Name of the pieces

It is possible when a piece can move to the square occupied by a piece of the opponent of any kind but only if the square that follows in the same direction is free. The piece that makes the capture jumps to that empty square and when passing capture, this is placed under the capturing piece, the captured piece. If the attacked is a column, only its commander is captured and the rest of the column is in the same position.

When a valid capture is possible, the player must make it. If once he has executed it, he can carry out a new capture with the same piece, he also has an obligation to do it, continuing this way until the catches run out. In the course of a turn, he cannot attack the same column twice.

Captures leading to the promotion

If the capture is made by a soldier or by a column commanded by a soldier who ends their movement in the last row, the soldier or the soldier commander is promoted to an officer but in that turn he cannot make more captures even if the position of the game seems allowing it.

In the example, when the play is executed, the commander of the attacked piece is captured and the green pieces are released. The soldier who commands the column is promoted to an officer but in that turn he cannot capture the pink token moving backwards but can only do so in the next turn if the same position of the pieces persists.

End of the game

The player loses if he can’t move any of his pieces because they are all captured or blocked by your opponent.