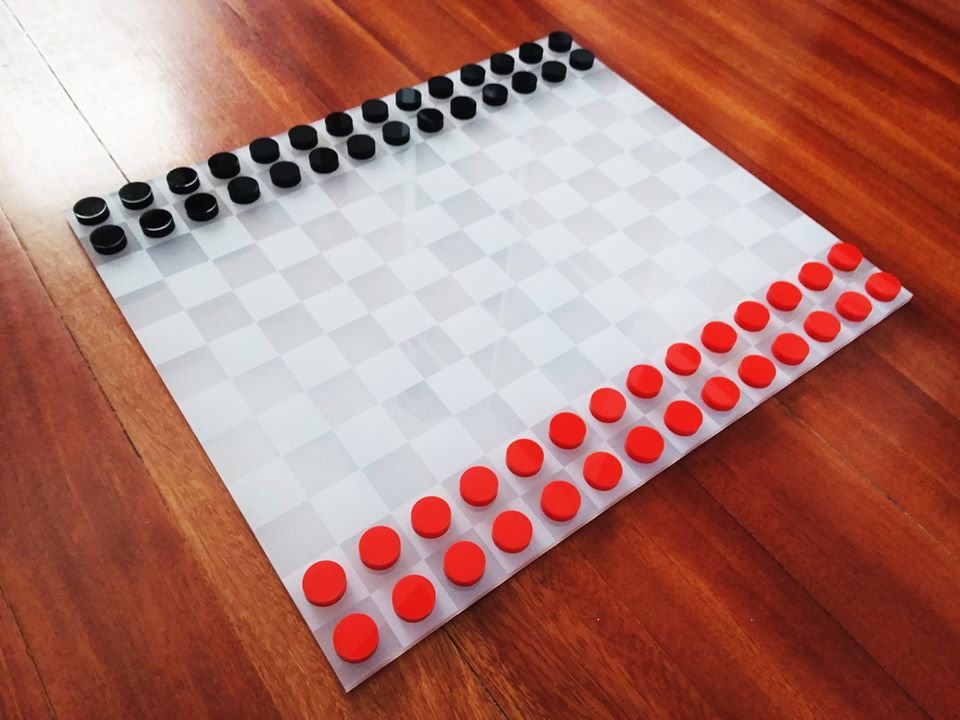 Epaminondas is an abstract game, similar to checkers, created by Robert Abbott in 1975. It is an expanded and improved version of the game ‘Crossings’ published in ‘A Gamut of Games’, by Sid Sackson. It is played by two players on a 12×14 gameboard. Each player has 28 pieces of different color than the opponent.

The concept of clarity applied to an abstract game means the ease with which players can see how the game is going, what are the strong positions, where there are weaknesses, which pieces are threatened and, in general, the transparency with which the structure manifests of the game itself. According to its author, this is the greatest virtue (and not the only one) of the game Epaminondas, named in honor of the famous Theban general who is credited with the invention of military training called phalanx.

The game is played on a board with 12 × 14 squares, but other sizes are also possible (e.g. 8 × 8 for a faster game). One player has white pieces, the other black ones. They are initially placed in two first rows (fully occupied) of each player side. The players make alternate turns, White begins and it is compulsory to move.

You can either move your own pieces orthogonally or diagonally to the next square, which must be empty, or move a phalanx made of your own pieces. A phalanx consists of two or more pieces of the same color in a continuous orthogonal or diagonal row. It can only be moved in its longitudinal direction and only as far as the number of pieces that make it up. You can split a phalanx and pull only with a part of its pieces, the maximum train distance is then the number of pieces that are involved in the train. A phalanx cannot move on or over its own piece.

If the first piece of the phalanx comes onto a square occupied by the opponent, it cannot be moved any further. This is also only possible if the number of opposing pieces that follow in the direction of the train behind it (including the piece directly reached) is smaller than the number of pieces in the moving phalanx. These opposing pieces are then hit by the train.

The goal is to bring your own pieces onto the opposing basic row. Player A wins if, after a move by B, he has more of his pieces on the basic row of B than pieces from B on the basic row of A. After each move, the opponent still has the opportunity to balance this balance, and if he cannot, he loses.

You cannot move a piece onto the opposing basic row if this move would result in a left-right symmetrical arrangement of the pieces. This rule prevents black from forcing a draw through symmetrical moves.