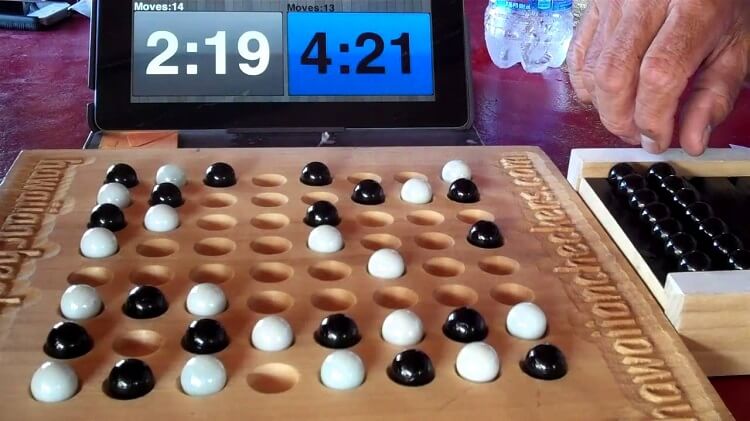 Konane (Kōnane) is a strategy board game for two players  from Hawaii . It was conceived by the Polynesians who lived there. The exact origins of the game are not known. However, different colored shells used to play this game were found in ( Hawaiian papamū ). James Cook described this game in Volume III of the travelogue of his third voyage of discovery between 1776 and 1780.

How to play Konane

The game starts with a specially made symmetrical board and there is not a specific number of cells to respect; or, a standard chess or checker board alternately covered with black and white stones.

One of the players removes two pieces white and black from the center of the game board and hides them in his two hands. The other player chooses one of them, and the color of the piece is the color that the player chooses. These two pieces no longer return to the board. The player with black pieces make first move.

All movements are performed by jumping. A jump consists of crossing the opponent’s pieces into an open position and eating the opponent’s pieces from the board. Opposing stones can be captured by jumping if they are horizontal or vertical to your own stone and there is a free space next to this stone; Depending on the variation of the game, several stones can be captured and taken off the board.

The movement can be performed horizontally or vertically, but it cannot be made at an oblique angle. It is not allowed to move in several directions during a turn. However, it is not mandatory for a player to take all eligible capture in one turn.

Goal of the game

The aim of the game is to make the last possible move; It doesn’t matter how many opposing stones you capture. Despite the similarity of the moves, this game does not belong to the family of checkers.