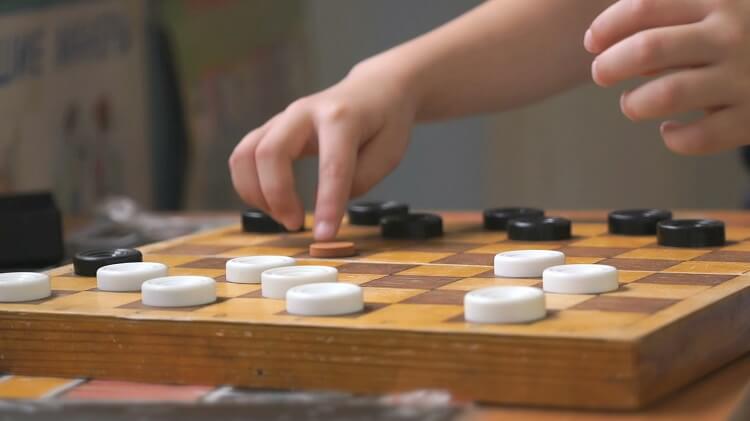 Board and starting position

A board of 8 × 8 squares is placed between the partners in such a way that there is a dark corner square to the left of the player. In the initial position, each player has 12 pieces, placed in the first three rows on black squares. In Jamaica, they prefer playing on the white fields of the board.

Rules of moves and capture

The player with black pieces makes the first move. Simple pieces must make there moves diagonally one field forward, but can capture forward and backward. The king can move to any field diagonally forward or backward. In the variant American Pool Checkers capturing the opponent’s checkers is a mandatory when possible.

With several capture options, the player chooses the capture option that he prefers; in the chosen sequence, it is necessary to capture all the allowed pieces available for capture. But, it is not necessary to jump over the maximum number of pieces. An opponent piece may not be captured more than one time.

When the last horizontal row of the board is reached, a simple checker becomes a king. If this simple piece reached the last row during the capture, then it turns into a king and stops, even if it is possible to continue the capture. In general, the rules for playing American Pool Checkers are the same as in Brazilian draughts, with the exception of the need to take the majority.

Traditionally, as in most types of checkers, only black fields are numbered from left to right and from top to bottom, starting from the upper left corner. The initial position and the final write through the dash, the sign of multiplication means capturing.