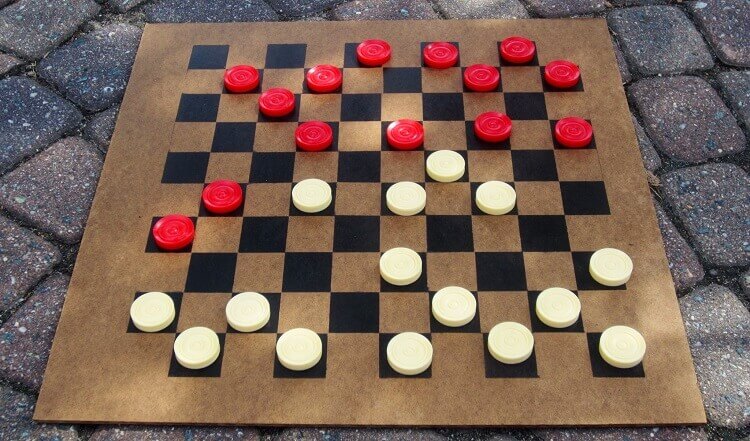 International Checkers (also called Polish draughts or international draughts) is a variant of the strategy board game “draughts”. The gameboard of International checkers is 10×10 alternating dark and light squares. The moves are made only on the dark squares. Each player begin with 20 pieces placed on the first 4 rows of each side of the board. The game-board is set in a way that the lower-left corner square have to be dark.

The basic rule for all checkers variants is that all the moves and captures must be made diagonally. The only differences between English draughts and International Checkers are in the size of the gameboard (10×10), number of pieces (20), the pieces can also jump backward (not only forward), the flying moves and captures power of the king, and the requirement that the max number of simple pieces be captured whenever a player has jump options.

A piece must be crowned if it reaches the last row of the opponent side of the board. It is then crowned by putting another simple piece on top of it. Crowned pieces, becomes kings and gain more power and abilities. They can move multiple squares diagonally in any direction and can jump over any opponent piece even if it’s far from it. They can also choose the square where to lands on after making a capture ( or multiples captures). But, as normal pieces, they must capture all the possible and eligible enemy’s pieces.

Other rules can be also applied in some checkers tournaments: